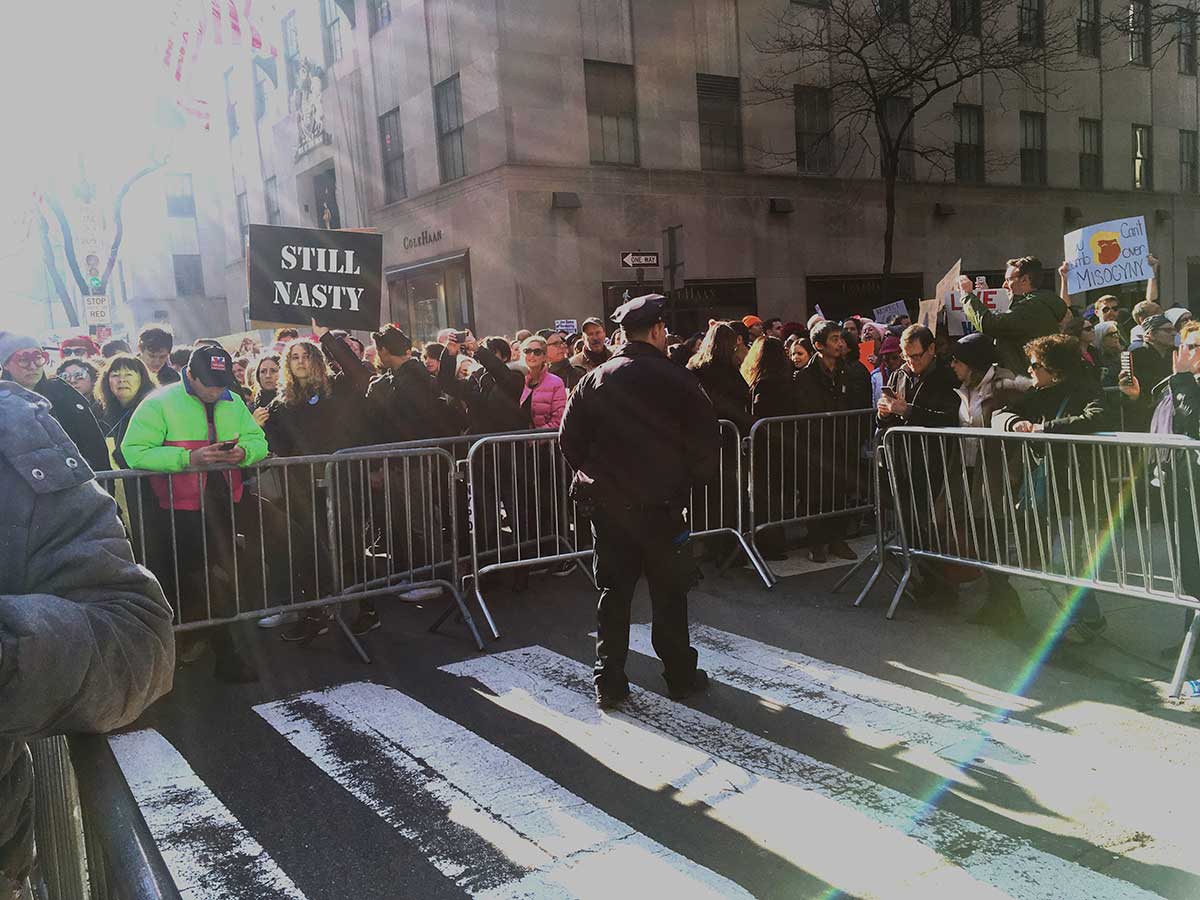 Featured image above is from the Women’s March in New York on Jan 21, 2017. Resistance begins right away, and we have to sustain it until our job is done. The artist’s job, as always, is to show the society to itself.

Medical offices, emergency rooms, and other places that people with chronic illnesses end up on any given day.

Happy New Year. One can hope. I’m putting up a series of images from the past year or so, all of them in New York.

Starting out in the Brooklyn sublet. I’m watching a scene similar to my real life moment – a workspace in a slightly crummy room. Click to enlarge.

The image below is of my downstairs neighbor, who cooked large amounts of meat on a very expensive-looking grill as often as possible. Since I was there in the summer, and my only windows looked out onto his deck, I found it impossible to ignore him. I had to leave the windows open (until I got an air conditioner) or suffer. It was hot! However, the open windows also let in the smell and smoke of cooking meat and the apartment was filled with it. I also had to listen to his conversations and his music when he had friends over to eat the meat, which was three or four times a week. And inhale their cigarette smoke. Which was often. Don’t young people know that cigarettes will kill them? Let it go! Okay! I let it go. I wish him well. I never want to go back to that apartment and – guess what? – I don’t have to! 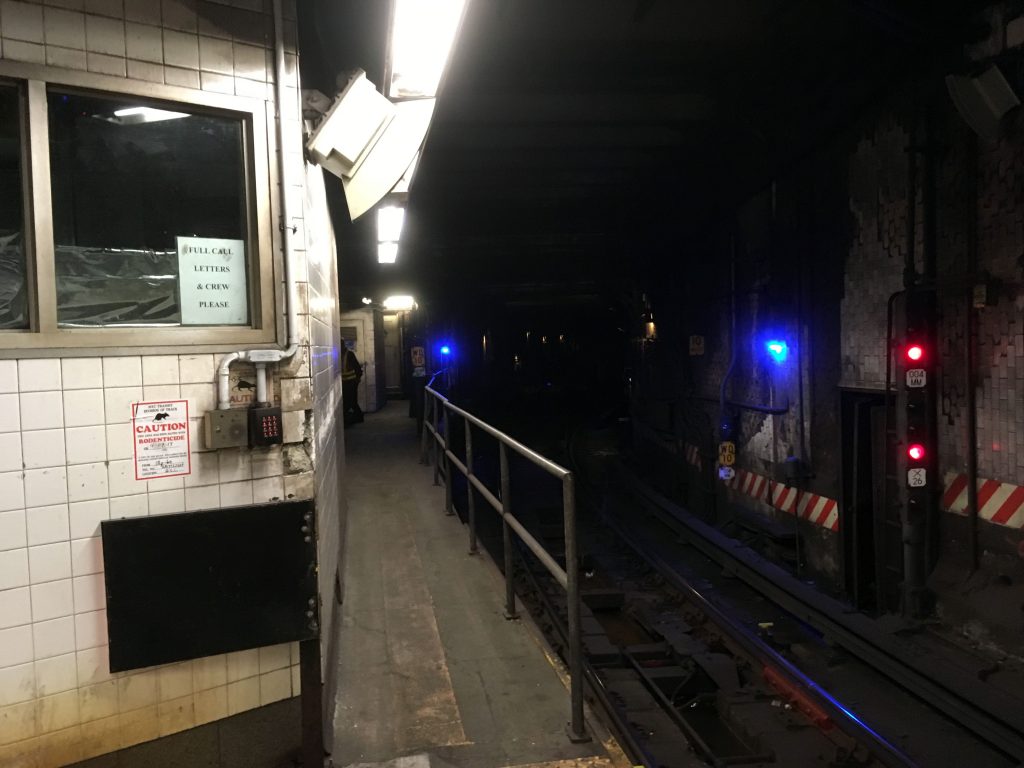 Now that I live in Staten Island, I rely on the Staten Island Ferry to get to the rest of the city and I’m in love with it. 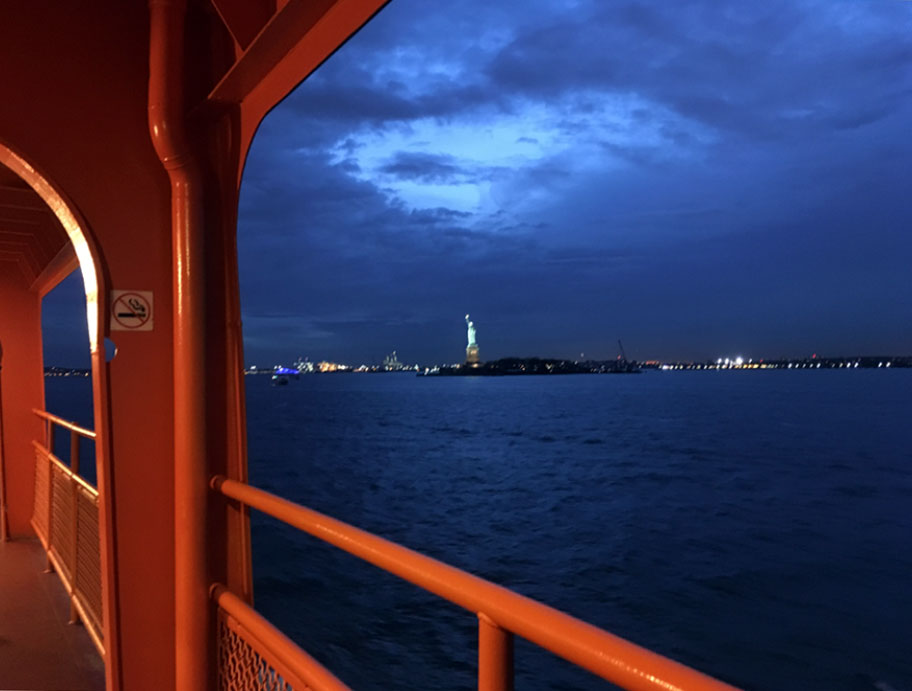 It’s been ages since I’ve posted new photos, although I’ve been taking them all along. I had an interesting and difficult semester teaching five classes and when I wasn’t teaching, I was prepping for my five classes.  I had no time for much of anything else including uploading photos! But I was taking pictures nonetheless and want to share these from the last few months, in and around New York.

On the trip back home, what the camera saw (rolling seas) ….

and what I saw (plenty of calm).

Walking around Battery Park, which is a place I rarely ever considered a “place” before (except the landscaping and gardening is beautiful – which I notice for just one second as I rush from the Bowling Green subway station to the Staten Island Ferry Building). I had about half an hour before the next ferry – had just missed one and it was a foggy night at the bottom of Manhattan, so I took a brief detour into Battery Park. I caught this carousel:

…and when I first uploaded it to YouTube, and like an idiot wrote faithfully it’s name and proper location, the video was instantly blocked. Big Brother was protecting the soundtrack. But it’s diagetic sound! If they want the sound protected, they need to not let it be heard in the open air. I have a right to record what’s in my space if I’m in a public space. So, fuck you copyrightists. I had to reupload without any descriptive terms. Fish. Every inch a space of commerce. How to escape?

This group of 17 photos represents random encounters with people and places along my usual routes.

and recorded live that evening at the Stonewall…

I was at the checkout desk at Butler Library, Columbia University, waiting for this gentleman to finish so I could make my request and I was struck by his appearance. Well, what’s not shown is his wild white hair and his bushy white mustache, which you will have to imagine. But imagine those aspects of his appearance with these beautiful roomy shiny trousers and you’ll have a complete image of the professor.

Walking through the Whitney Biennial I entered the gallery where the work of an old friend, Carrie Moyer, is being displayed. Large, gorgeous paintings. Full of care and also abandon. These museum ladies found a loveseat directly in front of one. They should be planning some great things for Carrie and her work.

As a commuter, I end up staring at the backs of so many people’s heads that it becomes something to do – an actual activity.  Not boring in the least!

Eating on the go at Columbia University

On Fridays I teach a 6-hour video class at Columbia University. I love the class. I’m grateful for the post. And I stayed absolutely fueled for the whole day with a box lunch of a peanut butter & jelly sandwich and a skinny dry capp, which I get at Cafe Joe in the lobby of Dodge Hall, at the School of the Arts. Without my PB&J and cappuccino I think my day would probably go south very quickly. I actually look forward to this every week.

I was walking down St. Mark’s Place one day, here in the St. George neighborhood. There was a heavy fog in from the sea. I walked past this one place, below, where it was raining. It was raining on the pavement, on the cars, and on the trees. Not just a drizzle, but rather rain. You can see the wet pavement, right? 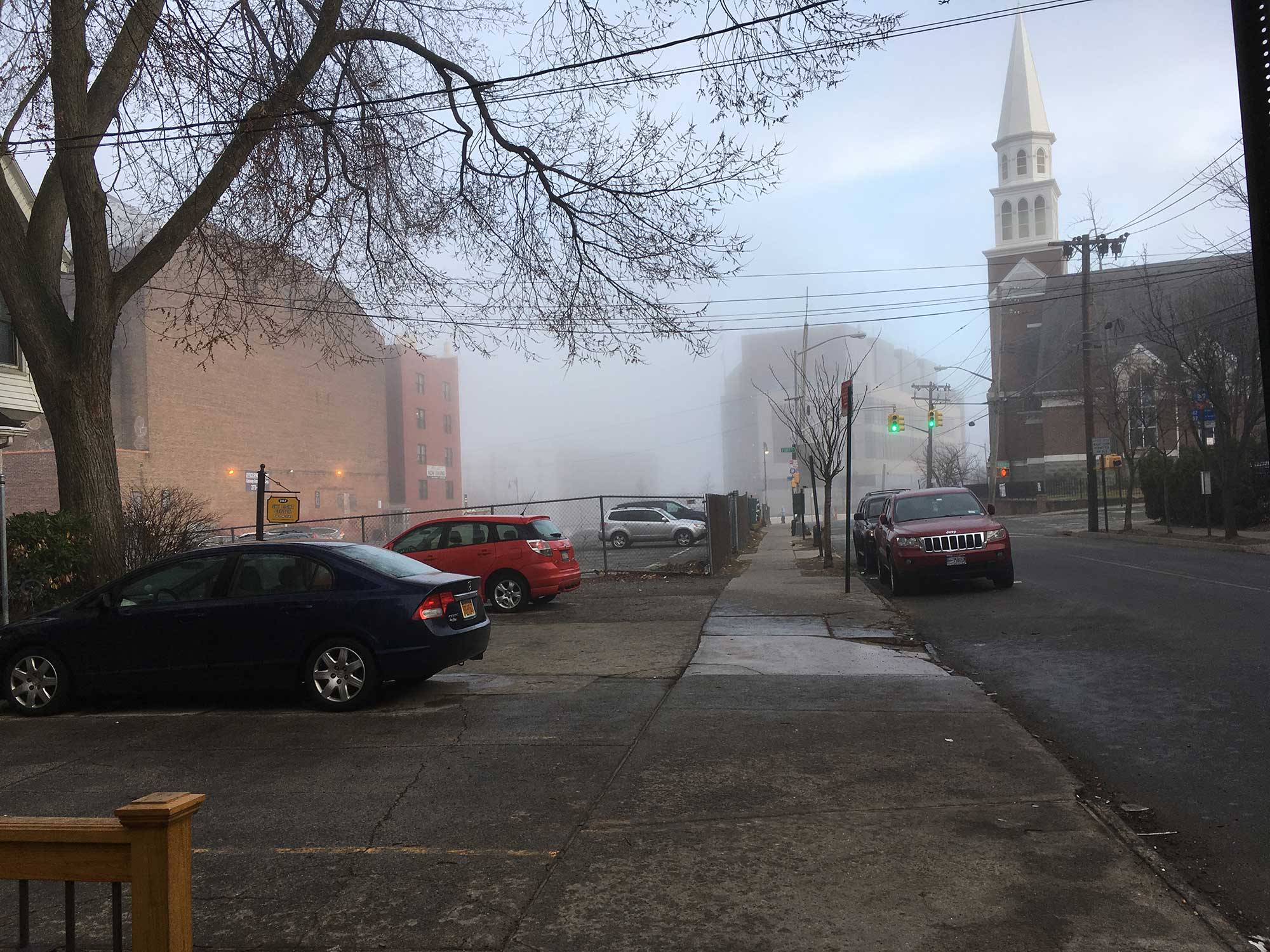 When I faced the opposite direction I saw that it wasn’t raining on the rest of the block, as you can see on the picture below: a lot of fog, but the ground remains dry. 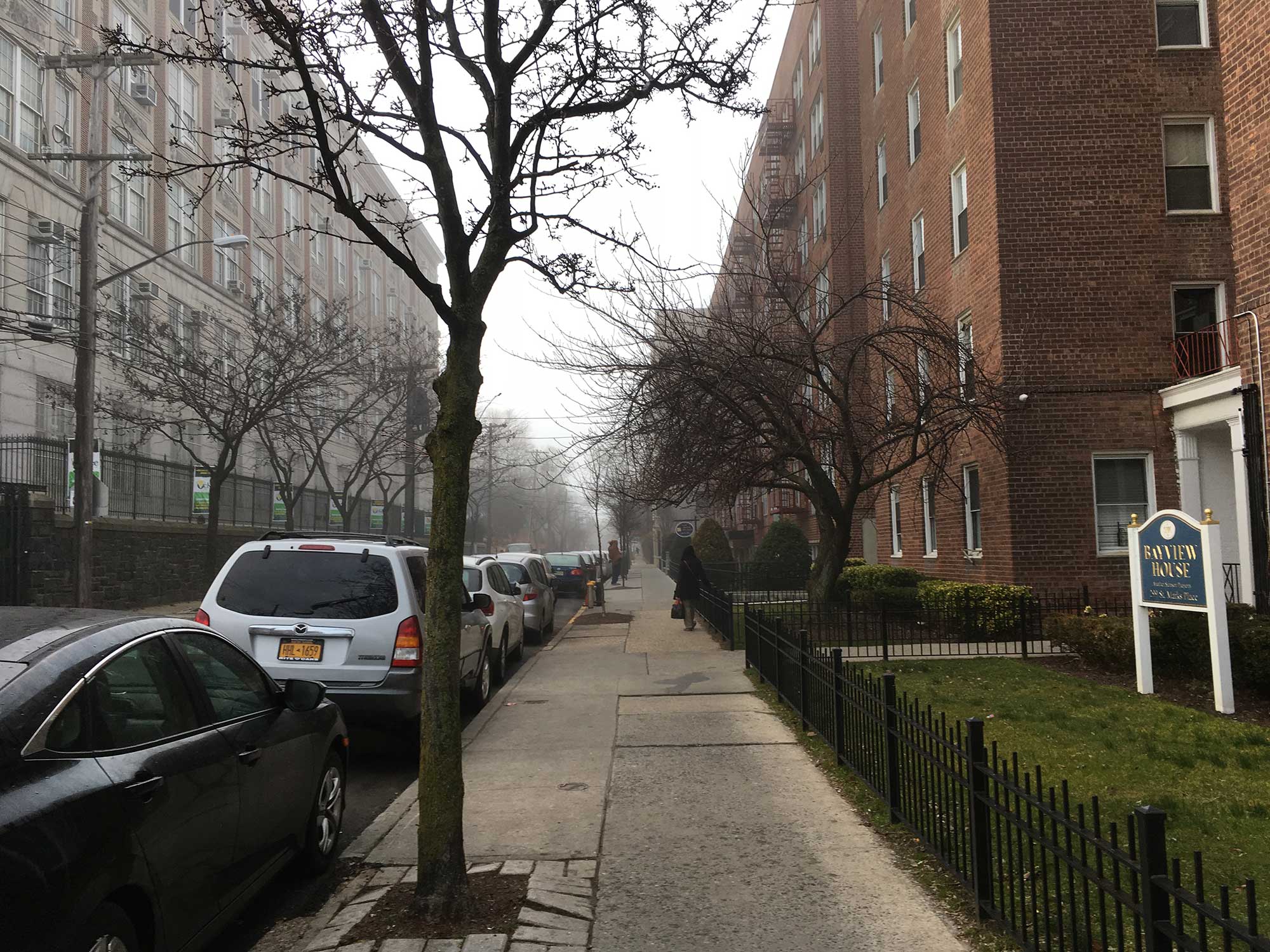 In fact, it was only raining in front of that one house. I stood in an interstitial area between where it was raining and where it wasn’t and felt just a few drops blow my way. Thank you, multiverse, for playing this joke on me!

I’m taking a writing class with award-winning novelist Laurie Weeks (Lambda, 2011 for Zipper Mouth) in a loft space in Williamsburg that has inoculated itself from the rabies of gentrification. This is the entrance beyond the outside door.