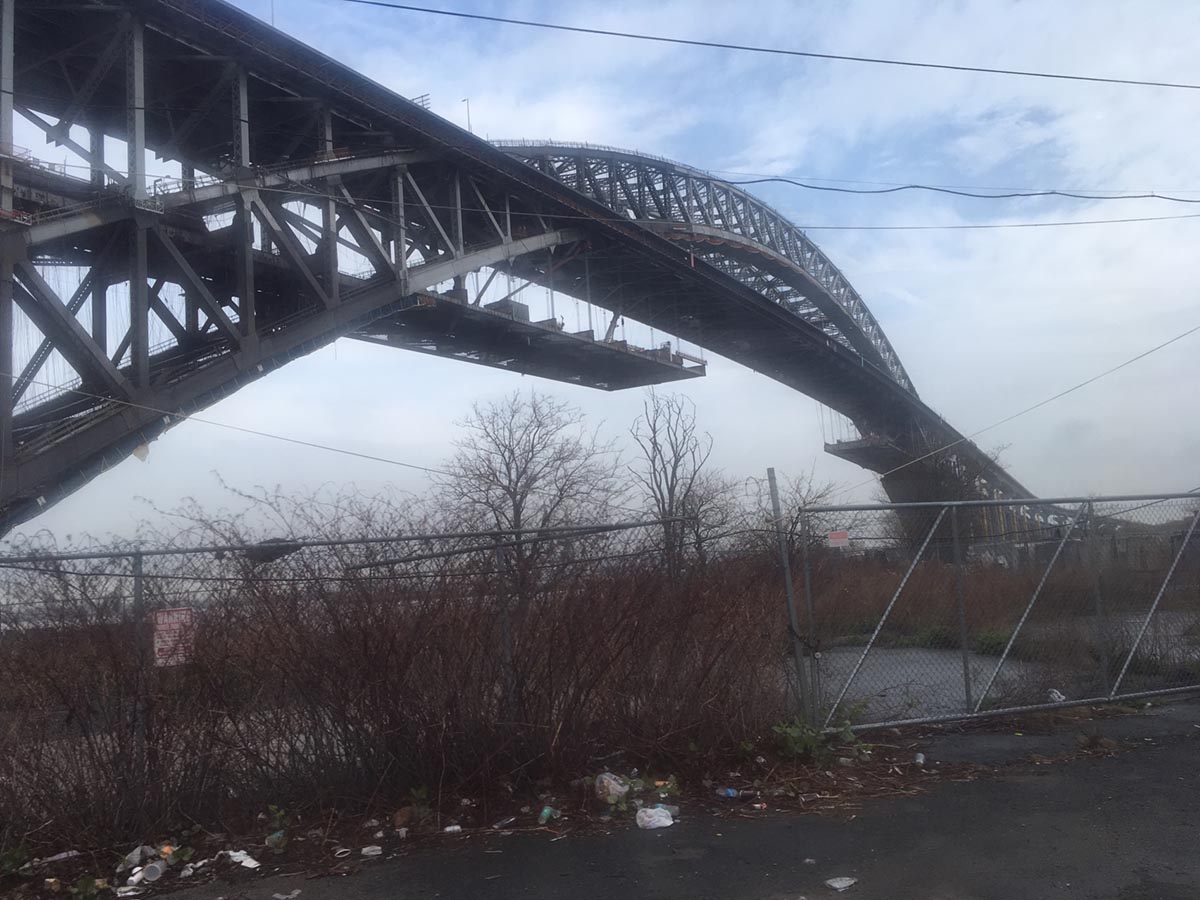 The Bayonne Bridge (Route 440 from NJ) had been undergoing renovation for the past few years, a major project to make the arch higher so that larger ships can pass under it. This is a great arch bridge over one of the busiest shipping straits in the area. I took this photograph from the College of Staten Island Ferry Shuttle, which passes by the bridge on it’s way to the college from St. George Ferry Terminal. The bridge seems to present a highway to the sky.

The Irreducible I: Space, Place, Authenticity, and Change

On amazon.com in paperback or Kindle version or order it from your independent bookstore

From
The Irreducible I: Space, Place, Authenticity, and Change

In Space and Place, Tuan discusses homeland in terms of attachment, scale and “cosmic” geometry:

Homeland is an important type of place at the medium scale. It is a region (city or countryside) large enough to support a people’s livelihood. Attachment to homeland can be intense. . . . Human groups everywhere tend to regard their own homeland as the center of the world. A people who believe they are at the center claim, implicitly, the ineluctable worth of their location. . . . home is the focal point of a cosmic structure.[1]

Humanity is adaptable, however, and has a very long history of roaming. Tuan observes that, “Cosmic views can be adjusted to suit new circumstances. With the destruction of one ‘center of the world,’ another can be built next to it, or in another location altogether.”[150] The enterprises of global capitalism require a labor force of migrant workers who leave hearth and home to do the work that the local citizens may reject. It requires the migration of commerce, as well, of corporations themselves that must relocate in order to profit from the exploitation of cheap labor. These types of migrations are not generally seen in the light of our million-year trek, but the migrations engendered by globalized industry and finance are responsible for the establishment of new communities that bring many aspects of their primary culture with them. Assimilation occurs, partly, but mostly the “bridge” model that Irigaray puts forth for gender equality could better represent the bridge that joins migrant communities to the new societies in which they gradually become an embedded cultural force. In his book Magical Urbanism: Latinos Reinvent the U.S. Big City, urban theorist Mike Davis describes the Mexico-U.S. border as “a lusty bastard offspring of its two parents.” He calls the nineteen hundred mile stretch of border, La Línea, an “historically specific institution,” that operates like a “dam, creating a reservoir of labor-power on the Mexican side of the border that can be tapped on demand . . . by polleros, iguanas, and coyotes for the farms of south Texas, the hotels of Las Vegas and the sweatshops of Los Angeles.”[2] The American Border Patrol imagines itself as a defense against a threatening alien invasion, but as one side constructs a wall and massive systems of surveillance, the other sets up a flowing economy.

The North America Free Trade Agreement (NAFTA), which came into effect in the mid-1990s, spawned a borderland of U.S. and Asian-owned maquiladoras – factories that import raw materials and export finished products while using cheap Mexican labor – on the Mexican side. The maquiladoras sustain “only a mirage of national economic development, [which] nonetheless has dramatically reshaped the culture of La Frontera and the inter-relationships of the dozen or so twin cities that span the border from Matamoros/Brownsville on the Gulf to Tijuana/San Diego on the Pacific.”[29] While work may seem steady, wages in the maquiladoras are low and environmental pollution, especially in terms of wastewater runoff into the drinking water supply, is high. Although twenty-five percent of jobs in Mexico are at the maquiladoras,[3] the Mexican workforce outnumber the jobs these factories can provide, and both documented and undocumented workers continue to travel north for work, bringing with them the most mundane and therefore vital aspects of their old communities – neighborhoods consisting of outdoor mercados, small playgrounds, multi-generational housing, and their own micro-economies of buying and trading goods and services within their migrant communities. These communities dot the San Diego area, creating a practical re-zoning that puts living, working and finding recreation all within the same area. And what flows from north to south? Waste, debris, and abandoned building materials flow south as people haul American waste for re-use across the border.  Eventually they improvise uses for the discarded tires, building materials, and even entire abandoned houses, which they transport from San Diego to build additions to their homes in Mexico. Tijuana is built with the excess of the American system.

San Diego-based architect and alternative developer Teddy Cruz considers Mexican immigrant neighborhoods in the U.S. to be more sustainable than what he refers to as the “oil-hungry development” of typical Southern Californian suburban housing complexes that rely on the privatization of transportation, and which lack a basic village infrastructure. Cruz suggests that urban planners examine the kinds of communities that immigrants from Mexico build in the U.S., studying what he calls the “informal” exico build in the U.S., studying what he calls the “informal” and “non-conforming spatial and entrepreneurial practices”[4] of the immigrants. The immigrants create specific uses for the cities and neighborhoods to which they migrate partly because of the living practices in neighborhoods from which they came. The Mexican neighborhood is a site of production on both sides of the border. From studying the immigrant models that spring up organically, Cruz recognizes how the local becomes enabled in bottom-up types of dynamics and believes these dynamics can “trickle up to produce top-down changes – the idea of transitional infrastructures” that create not only a specificity of the public, but also a “specificity of rights.”[5] According to Cruz, a neighborhood is “performed” through its social, political, and economic realities, and performing a neighborhood well means designing against homogenization and a neutral idea of the public realm. It means developing areas incrementally in order to enable a variety of informal economies to build up, and acknowledging the specificity of the inhabitants and the location. Neighborhoods perform themselves, becoming sites of production within micro-economies and local cultures that have the potential, through interrelation and diversity, to become sustainable environmentally and financially. This must happen from within a radicalized and nonhierarchical sense of the local. The idea of style in architectural design, which is frequently the main focus of urban planners of low-income housing for marginal communities, becomes a moot point. “Informal” describes praxis as well as economics, and is a method of democratizing development; aesthetics develop from specific plans for use and the availability of materials locally, and are not related to symbolic embellishment or simulations of traditional styles of architecture.

The Irreducible I: Space, Place, Authenticity, and Change  takes a new look at subjectivity using an eclectic mix of disciplines to create a map of individual space within the continually changing social space.

The Irreducible I taps into the writings of Situationists Georges Perec and Raoul Vaneigem, and social theorist Bruno Latour, testing them against the observations of geographer/anthropologist Yi-Fu Tuan, journalist Naomi Klein, and social historian W. E. B. Du Bois.

Subjectivity is an ongoing process of connecting humans and non-humans, technologies, and objects, architecture and action as key relational elements in the formation of an authentic space of daily life. Works by Félix Guattari, Kathy Acker, Avital Ronell, Bruno Latour, Gloria Anzaldúa, Henri Levefre, and Michel de Certeau and others are brought together in locating pathways of resistance to the narrowing of our experience of the everyday by state and corporate agendas for control.The relational “I” emerges as a key for human agency, for presenting an ever-becoming self to an ever-forming interconnected global landscape of probability.

Read and download the introduction to this book Irreducible_I_introduction

If you would like to read The Irreducible I: Space, Place, Authenticity, and Change it is available in paperback and Kindle versions at amazon.com

Reviews of The Irreducible

Sure, the self is a construct. Ever-changing and unfixed, it’s contingent upon so many factors that accounting for it in its entirety becomes entirely impossible. Rather than taking this as a lamentable end-point, THE IRREDUCIBLE I treats this fact as virtue, as the very foundation for authentic experience of one’s self and one’s world–self and world being one thing after all, on a spectrum that shifts relentlessly between figure and ground, bond and boundary. This shifting requires us to be on our toes. It calls for an agility of attention and flexibility of intention that Dougherty points to through numerous examples of individual and communal acts of authenticity, ranging from Situationist strategies of détournement to Shamanic ritual, leaderless protest to le parcours, art-making to love-making, and more. Nothing’s off limits. And the writing itself demonstrates its many concerns, resisting closure without sacrificing clarity, simply by setting ideas next to one another, allowing them to form bonds or communities of thought that may disperse or reconvene at any point for reasons particular to given circumstances. It’s resistant without being reactionary. It’s”acceptance with a vengeance,” as Dougherty writes. It’s at once aTemporary Autonomous Zone and manual for the practice of everyday life. It’s a blast. Read it.

The Irreducible “I”: Space, Place, Authenticity and Change by the artist Cecilia Dougherty is an observant text with a fluid curiosity. To read it is to have an almost visual experience as Dougherty builds a landscape encompassing philosophies, historical events, and everyday acts. This landscape isn’t fixed, it invites intrusion and over it,after awhile, I noticed I had collaged my own mapping–bringing my Irreducible I–in a connected experience with the representations that Dougherty had offered. A good read–not to be missed.

Thank you Brett and Elise!