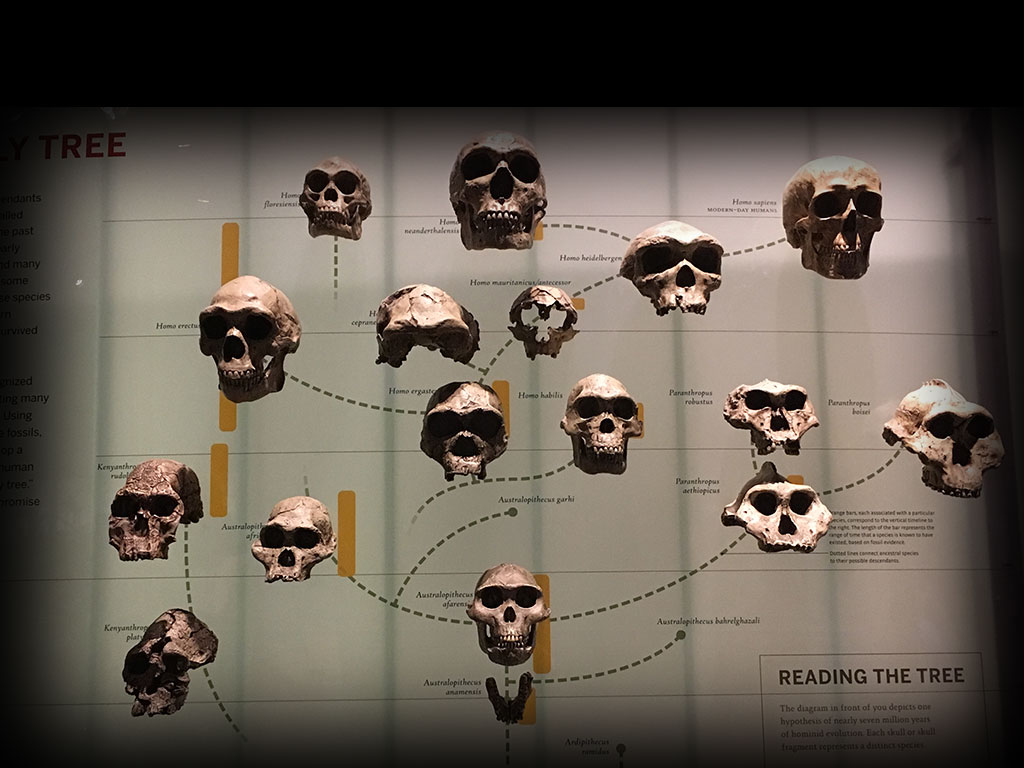 Interweaving archaeological evidence with speculative fiction, Cecilia Dougherty’s web-based drama Time Before Memory (2019) interrogates the origins of our species and prompts reflection on its present state. Set during the Paleolithic Age (29,900-40,000 years ago) the multimedia play unfolds in three acts, each containing an indefinite number of scenes. The multimedia work was created with Twine — an open-source, engaging story generation platform — and combines elements of video games, literature, photography, and video. The tension between individual autonomy versus collective action, alongside interrelated issues of land, migration, and competition, is a major theme throughout Time Before Memory. Given such motifs, Dougherty’s inventive work of electronic literature resonates in our immediate moment, one marked by toxic individualism, scarcity of resources, and widespread fear stoked by nativist rhetoric.

Users of Time Before Memory are invited to replay a defining moment in human history: the final encounters between Neanderthals (Homo neanderthalensis) and Cro-Magnon humans (Homo sapiens). The story explores the shifting power dynamics between the “Magnons” and the “Neanders”, as well as each group’s relationship to the surrounding landscape and animal populations. As the artist explains, humanity as we know it began with settlement, possession, and the destruction of “anyone who was not ‘us.’” In Dougherty’s non-linear narrative the user is cast, in one instance, as the female Neander protagonist Haizea; in another, as a third-party observer; and occasionally as other characters.[1] One of the most interesting and important features is that players have the ability to return to diegetic junctures and pursue different branches of the saga, uncovering interrelations among characters and intersecting plot lines. The narrative matrix is akin to cave networks or forest pathways with dead ends, loops, and intersections. Reinforcing this aspect, imagery and sounds of caves and forests recur throughout the adventure in background images, descriptions, and sound effects.

Depending on the user’s actions, it is possible to jump between vignettes set in separate geographical locations. These easily-manipulated narrative mechanics allows participants to see different perspectives and better understand the motivations of conflicting actors. While this narrative structure can be disjunctive, it is not too disorienting. The longer the user investigates Dougherty’s work, the (hi)story and psyche of characters and H. sapiens becomes apparent. Time Before Memory encourages reflection on the deeply-ingrained tribal mentalities and impulses that structure our present-day behaviors. The link between the characters in this Stone Age saga and contemporary participants is highlighted by grafting imagined prehistoric decisions and thought processes onto photographs of early human sites at Altamira and Lascaux.

In Act II, it is revealed that the Magnons occupy the cave the Neanders once did, placing them in a better position to hunt. The Neanders prepare to move to another valley, but a clash between the two hunter-gatherer camps is foreshadowed. Haizea (the user’s viewpoint character) and Eneko (Haizea’s son) decide not to follow the rest of the Neanders and instead attempt to meet two allies in the Magnon camp—Esti and Oihana—in hopes of reaching a paradise called Shanidar.[2] Act III culminates in an epic battle,with the Magnons slaughtering the Neanders. The massacre is framed as a sacrificial ceremony, with chanting, dancing, blood-drinking, and communal consumption. These grisly closing scenes visually manifest a poignant passage from Dougherty’s artist statement: “As societies grew, as people settled and land became possession, spirits became gods and we went to war over both land and gods.”[3] In a separate episode, participants are left to infer who among Haizea, Eneko, Esti, and Oihana made it to the legendary cave.[4]

Towards the end of the narrative journey, a photograph from an archaeological museum is juxtaposed with the dialogue box. The photograph captures a diagram charting human development, illustrated with evolutionary lines and excavated skull fragments. This striking image speaks to individual choice, collective action, storylines, teleological tensions, and the undefined trajectory of H. sapiens. Studying this image, I recall a scene from Act I where Esti stands in the Magnons’ gallery of cave paintings—the group’s visually recorded history. A Magnon explained the intercessory images allow them to commune with ancestral spirts, “unify[ing] everyone across time, even time before memory.”[5] The dialogic exchange underscores the importance of images in constructing and preserving collective memory. In the fateful conflict with the Neanders, it becomes lost on the putatively superior Magnons that both camps share a common heritage.[6] This fact is first obscured by concerns about land use and drowned out completely by ritualistic chants. Unlike the karst-like drama, which has a foregone tragic coda, the course of human history can still be altered. Our legacy does not have to be defined by fixation on differentiation, intolerance, assertions of supremacy, borders, and human and ecological violence.

Time Before Memory launched on Microscope Gallery’s online platform on December 7, 2019. In the coming weeks, the interactive work will come down off the site, but will remain accessible through Cecilia Dougherty’s website.

[1] It is worth noting that much of the story is seen through the eyes of the female protagonist Haizea, a minority, migrant mother who faces many difficult decisions in her quest to keep herself and her son Eneko safe.

[2] At numerous flashpoints in the drama, there are oblique references to the special status of Eneko. Since he is the offspring of a Neander (Haizea) and a Magnon (Uda), both groups contest possession of him. The character of Eneko speaks to the fact that humans and Neanderthals interbred, as evidenced by recent DNA testing of Neanderthal fossils.

[4] The story describes Shanidar as a large cave in the hills above a valley flanked by two rivers and filled with birds, animals, and fruit. At the end of the drama, one of the final texts elaborates that Shanidar is a cave in Iraqi Kurdistan, where the remains of 10 Neanderthals dating from 65,000-35,000 years ago were found. Scientists believe that Shanidar is one of the last locations where this archaic hominin species lived before their extinction. For a summary of the findings at Shanidar Cave, see “Shanidar 3 – Neanderthal Skeleton,” Smithsonian Institution, National Museum of National History, last updated on 31 May 2018, https://humanorigins.si.edu/evidence/human-fossils/shanidar-3-neanderthal-skeleton.

[5] Cecilia Dougherty, Time Before Memory (2019), Act I. Since the Magnons only recently came to inhabit this cave, the narrative implies the imagery was painted by the Neanders, and the Magnons will continue to add to the story.

[6] Fossil and genetic evidence suggest that Neanderthals and modern humans evolved from a common ancestor between 700,000 and 300,000 years ago, either Homo heidelbergensis, Homo antecessor, or possibly another species. See Lisa Hendry, “Who were the Neanderthals?” The National History Museum, accessed 1 June 2020, https://www.nhm.ac.uk/discover/who-were-the-neanderthals.html.

Tony Huffman is a Brooklyn-based art historian, independent curator, and cultural critic. As a researcher and writer, he is interested in critically examining the work of visual practitioners who explore questions of labor, material histories, craft traditions, post-colonialism, and historiography. He received a BA in Government from Centre College and completed his MA in the Case Western Reserve University and Cleveland Museum of Art Graduate Program in Art History, where he was a Barbato Fellow and teaching assistant. His research has been funded by grants from the Knight Foundation, the Baker-Nord Center for the Humanities, and Phi Beta Kappa. To read more about his curatorial and editorial projects visit his academia.edu profile.