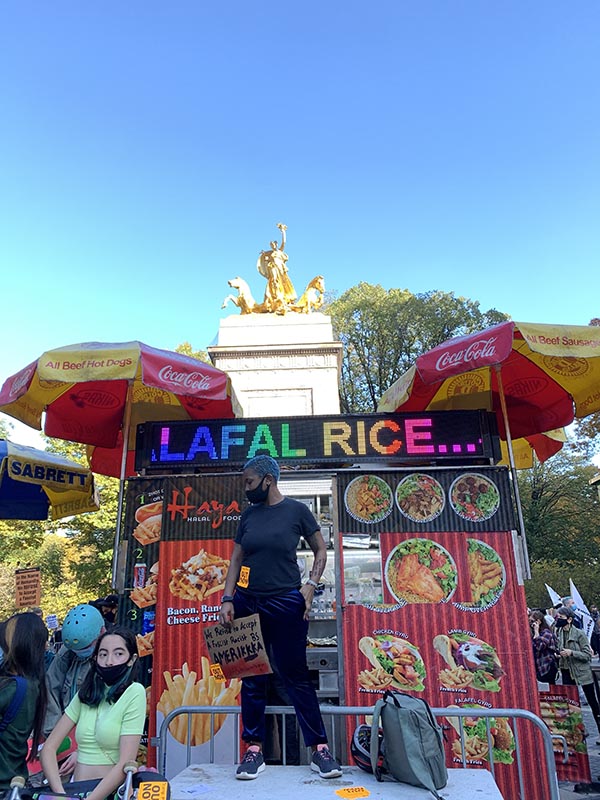 Photograph above is from a celebration of the Biden-Harris victory and the defeat of Donald Trump, which was announced that day, Nov 7, 2020. Location is Columbus Circle, NYC. 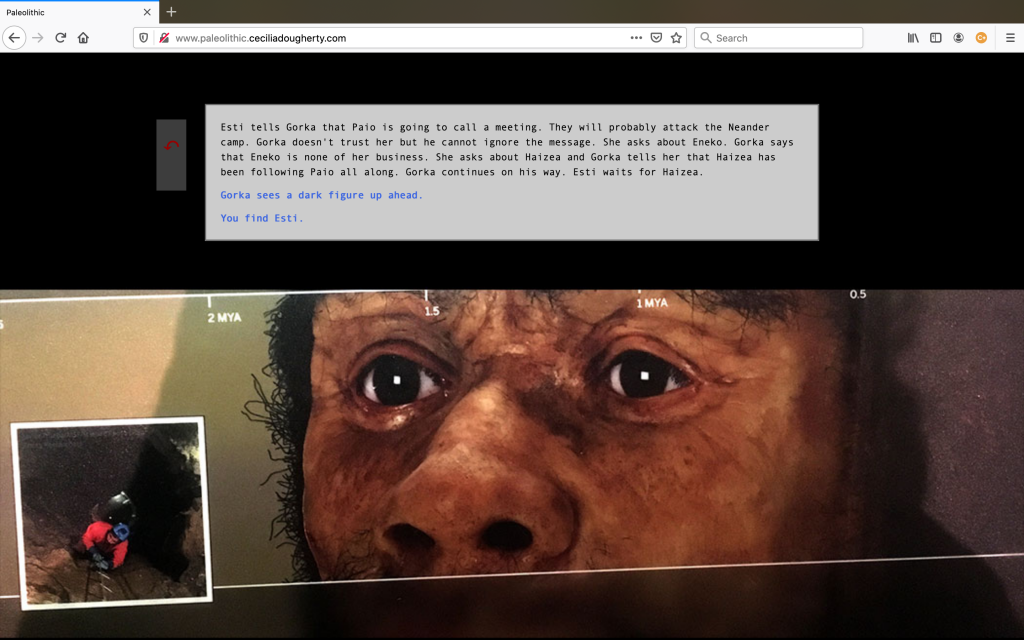 Excerpt
“Users of Time Before Memory are invited to replay a defining moment in human history: the final encounters between Neanderthals (Homo neanderthalensis) and Cro-Magnon humans (Homo sapiens). The story explores the shifting power dynamics between the “Magnons” and the “Neanders”, as well as each group’s relationship to the surrounding landscape and animal populations. As the artist explains, humanity as we know it began with settlement, possession, and the destruction of “anyone who was not ‘us.’” In Dougherty’s non-linear narrative the user is cast, in one instance, as the female Neander protagonist Haizea; in another, as a third-party observer; and occasionally as other characters.[1] One of the most interesting and important features is that players have the ability to return to diegetic junctures and pursue different branches of the saga, uncovering interrelations among characters and intersecting plot lines. The narrative matrix is akin to cave networks or forest pathways with dead ends, loops, and intersections. Reinforcing this aspect, imagery and sounds of caves and forests recur throughout the adventure in background images, descriptions, and sound effects.

“. . . The longer the user investigates Dougherty’s work, the (hi)story and psyche of characters and H. sapiens becomes apparent. Time Before Memory encourages reflection on the deeply-ingrained tribal mentalities and impulses that structure our present-day behaviors. The link between the characters in this Stone Age saga and contemporary participants is highlighted by grafting imagined prehistoric decisions and thought processes onto photographs of early human sites at Altamira and Lascaux.”

Cecilia Dougherty’s In-Between Theories takes a ubiquitous moving-image format, the GIF (graphics interchange format) and infuses it with unexpected purpose. Many of us encounter uncountable GIFs on a daily basis, since the easily shareable format, marked by compressed data and limited color palettes, has joined the lingua franca of the internet. Dougherty’s startlingly rich GIFs, however, embrace vast timelines of geological epochs, the immediacy ofpolitical upheaval, and incisive resonances between text and image.

Tanya Zimbardo:
Cecilia seemed to be ahead of the curve with performance reenactment, not only Fuck You Purdue (1987), but also riffing on canon with the all-women send-up of Lennon and Ono in Grapefruit (1989).

Steve Seid:
Grapefruit was a landmark work. It was a great appropriation of a typically masculine space.

“I’m Jane Dobson and this is my damn story.” So begins an off-kilter comedy of sexual reckoning in the seventies. Coal Miner’s Granddaughter uses semi-autobiographical tidbits to dis a dysfunctional family. Lancaster, PA is the opening site for the specifics of the great American breakdown. Jane (played with comic fragility by Leslie Singer) is the quiet, sickly one in a domestic unit comprised of venomous daddy Dobson (Kevin Killian), momma unbearable (Didi Dunphy), and two hapless siblings. Relieved of the family fetters, Jane leaves for college, only to discover that she isn’t attracted to academia, she’s attracted to women. This new-found knowledge takes her to San Francisco where she gets the grand erotic tour, from floor to Sealy. Jane’s sexuality is an expression of her haunted vulnerability. You can read her helplessness in every glinting thigh, every leathery harness. Shot with a low-end camcorder, C.M.G. has the murky look of memory; the camera wanders restlessly as if searching out some truth from Jane’s past. What it finds are Plain Janes with big desires.-Steve Seid