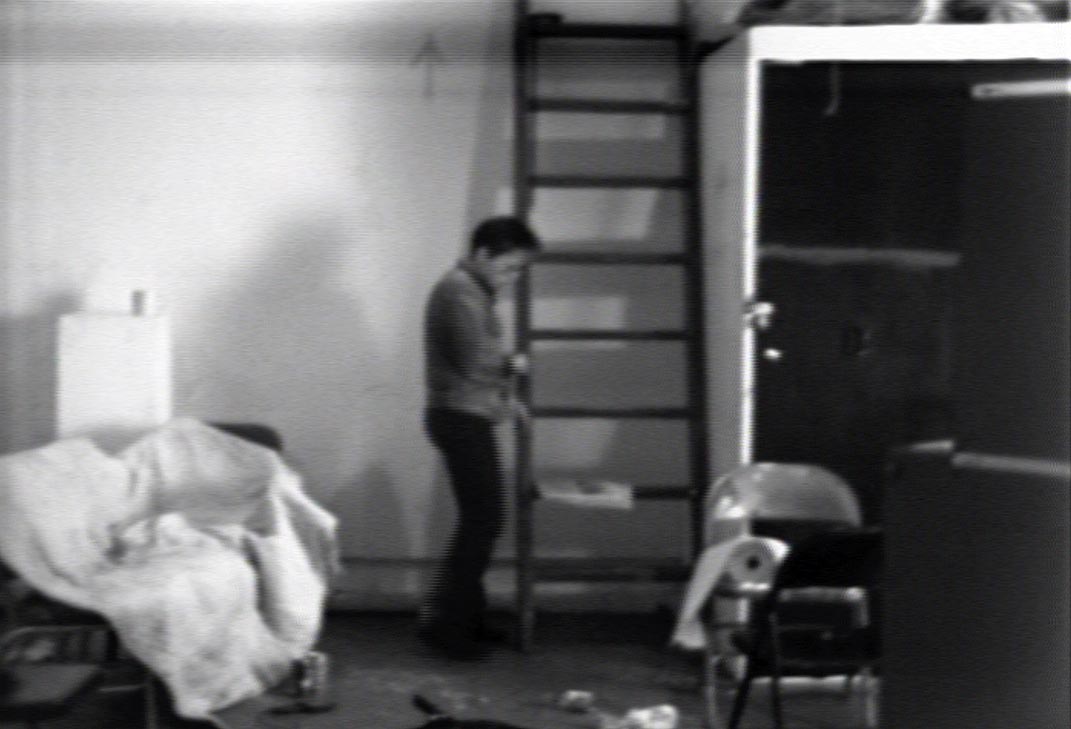 RELATED: This online screening is presented as accompaniment to the one-time-only screening Dale is Dead presented January 12, 2023 at The Lab (full details here) and the publication of An Urgent S.O.S through a Sea of Static: Writings by Dale Hoyt and Natalie Welch published by San Francisco Cinematheque a zine compendium of Dale’s writings (details here).

How would you describe a gathering group of unruly artists? A fortuitous anarchism, or just trouble on the way? And if such a faction existed in one particular moment and in one particular place, the SFAI, providing unruly succor for its constituent parts, what would you call that moment? A discordant convergence?

Just such a thing occurred at the San Francisco Art Institute in the early-and-mid eighties when a gaggle of singular young artists converged on the recently formed Performance/Video Department and all (heaven and) hell broke loose. A moment, such as it was.

With every upheaval, whether aesthetic or political, there are ringleaders, and among them at the P/V Dept. was a bratty pact—Dale Hoyt, along with his pals Marshall Weber (who would go on to found Artists’ Television Access) and Andrew Huestis—and Cecilia Dougherty, leading an insurgent group of women artists that included Leslie Singer, Azian Nurudin, Didi Dunphy, Jill Garellick and others. The creative energy welling from this convergence was enough to overheat nearby North Beach. If you add to that mix a core faculty of Howard Fried, Paul Kos, Sharon Grace, Doug Hall, Kathy Acker and Tony Labat, you had fissionable artistic material.

This streaming component of Cinematheque’s tribute to Dale Hoyt, who passed away on April 12, 2022, attempts to sample the turbulent modus and mood that characterized this unpredictable confluence of young artists. It’s not complete by any means, not even close.

To set the tone, Chaos Theory opens with Dale Hoyt’s early declarative Your World Dies Screaming (1981), the videowork heard round the SFAI. Populated by fellow students, including Marshall Weber and Andy Huestis, this brief cry for help gathers confused nihilistic confessions around a pop music collage that implodes the self-loathing with exuberance. Most ironic is Ricky Nelson crooning “The tender glow is gone, I know, You’re free to go.” A punky send-off cluttered with saccharine subterfuge.

Marshall Weber’s pithy Garbage Head (1981) is an antagonistic bookend to Hoyt’s entry. A tattered montage of urban terrorism is punctuated by Weber’s plaintive question, “Why can’t you be a nice person?” The question is never quite answered as junior guerrillas traverse the cityscape with mean intent. But snippets of dense pop culture seem to be the dulling contents of the titular garbage-filled head as Weber’s videowork exits over an image of boy scouts marching in lockstep. Weber’s Funk Is Its Own Reward (1981) begins at a site much trafficked by SFAI students—an enormous Tower Records at Bay & Columbus, beneath the promontory of the SFAI campus. Here, art partner John Martin (with whom Marshall would create Martin-Weber Gallery) gleefully exits the store with a copy of Michael Jackson’s Off the Wall LP. The soundtrack kicks in as Martin enters a party scene of one. That’s its own reward.

As gregarious as Dale Hoyt might have appeared, at the same time he was a bit camera shy. Andrew Huestis’s Jungle Gym (1981) features the rare starring role, if starring is a supernova in slo-mo. Here, Hoyt, crowned with a bountiful blond wig, oval glasses and a voluminous lacey dress, bombards Margo Adams, sweetheart of the P/V Dept., with unanswerable chatter. The two tug on a silicon diaphragm while a surf instrumental floods the scene. It’s high romance in an antechamber to angst. In another concurrent work, My Pal Foot (1981), Huestis takes the wracked monologue that you see in Hoyt and Weber’s work and extends it into an epic paean to self-pity. The opening soliloquy finds Huestis in close-up, his head ringed with a buoyant, blue tutu, as he bemoans his sorry state. Several short dyspeptic orations follow with Huestis finally uttering “please help me”—from anxiety ridden adolescent to full-groan man.

Central to Performance/Video was Leslie Singer, an unabashedly immodest presence on campus and at Artists’ Television Access. The Madonna Series, Parts 1-5 (1987) is more a cat claw swipe at Ms. Ciccone than any adoration. Beneath a sour rendition of “Lucky Star,” Singer gyrates while the camera ogles, in close-up, some feature of her body. Series titles like “Why Madonna Should Be the Editor of New Yorker Magazine” and “Madonna Bids Andy Warhol Farewell By Singing A Tribute To Him At His Funeral” skew the overarching prestige of pop celebrity, turning it into an insufferable sinkhole of little cultural value.

Cecilia Dougherty’s career is marked by courage of all sorts, from her early lesbian vignettes to the upbeat ambitions of Grapefruit, the Beatles’ break-up cast with all women, and Coal Miner’s Granddaughter, a country girl in the city finding same-sex sex and happiness. But the seemingly simple Fuck You, Purdue (1987) took courage of a different sort. Here, Dougherty restages a seminal video performance by Howard Fried, chair of the P/V Dept. Fried’s original is a figurative yelling match between two drill sergeants who bullied his brother. Dougherty’s redux invades the crass male space (of a mentor), and through her plaintive utterances demotes the implied masculinity.

Paula Levine takes a different tact, critiquing the predominantly male gaze of the camera’s eye. In Mirror, Mirror (1987), Levine captures, visually, a body builder’s compulsive display of his physique. With the footage sensuously slowed, the viewed body writhes in aqueous abandon, until the camera’s presence is seen. Then the image is altered as the gazed upon responds with remarkable suspicion. In this phase, the noted “mirror” reflects only male aggression.

Ivar Smedstad was a formalist of a different sort. His interest was in the rhythmic and percussive properties of the medium. Categorized as scratch video, High Fidelity (1986) commandeered disparate visual passages, everyday objects and actions and rigorously orchestrated them as unexpected sonic events—snot sneezed and glass broken, an apple severed and a toy dinosaur stumbling—actions and their associated sounds edited at breakneck speed until a fugal construct emerges. As the opening voice-over exclaims: “High Fidelity. You’ve heard a lot about it. But what is it? Well, let’s show you.”

Possessing a similar style of aggressive parody as Leslie Singer, Azian Nurudin nevertheless defined a performative space all her own. Her Malaysian Series, Parts 1-6 (1987) combines a determined sexual stance, coupled with her Malaysian origins, as both play out against domestic space. Literally whipping household objects, a toaster oven, a stove, a doorway, while Malaysian religious chants play on, suggests that Nurudin’s self-invention is at odds with the conventions of both American and Malay culture. In the Malaysian Series, the whip represents both a resistance to inculcation and a source of strange pleasure.

Fairy tales are ripe for the ripping. Emjay Wilson’s Donkey-Skin (1988) is just such a recounting as it takes this untoward tale and foregrounds the farcical love. In this ghoulish fairy tale a king must remarry and his objectionable object of desire is his very own daughter who will consent only if he agrees to kill their magical donkey. The incestuous overtones are amplified by Wilson’s choice of queasy illustrations and a counter-narrative of love-gone-bad in contemporary America. Surely, romance will make an ass of us all. The soft cloying voice that reads this noxious tale belongs to none other than Dale Hoyt.